A bunch of years ago I was given the best larp advice I have heard so far. Today I’ll pass it on.

That’s it. The best larp advice I have to offer. The advice might not look like much, and I wasn’t very impressed with it when I first heard it.

”Involve other players? How about, no? I playing a cool loner and my character has some important secrets so I can’t risk revealing them. Also other larpers might ruin my play, either because they are going to ruin things for my character or because I might fins them boring and not like them.”

As you can see, I was a bit immature. Yet, I think some of my initial resistance might be something a lot of players struggle with. There might be in character reasons why involving others can seem like a bad idea. We also want the best possible play experience and we might not feel comfortable playing with just anyone or have some fool ruining our game.

Fear not, I will address those issues and explain why it still is the best larp advice I ever heard.

Larp is about interaction

The organizers of a larp might set up a starting point and engineer some of what will happen during a game. But the game itself is about interaction. Interaction between the players, and interaction with the framework the organizers set for the game. What is interaction?

It is actions that  affect and involve other people. During a larp a lot of things are happening, both inside you and outside you. You might have all sorts of awesome thoughts and feelings about the game, but only how you act influences other players game. In return only other players actions affect your game, no matter what awesome thoughts others might be having.

Your larp experience depends on your interactions with other players. So you better make the best of them.

What you want to strive for is to be active and engaged when you interact with other players. Rather than hoping for that random interaction that will turn out good, striving for being active and engaged will make the scenes better. That means involving other in what you do, and involving yourself in what they do. Either by working together with other players, or working at cross purpose. Or finding some other way to involve them in what you are doing.

Choose actions that involve other people

Let’s say that your character learns a secret. You know who killed the rebel leader.

At larps keeping secrets is easy. In real life you might notice if someone you know well is hiding something. In a larp you don’t know the other characters that well. Unless the player decide to clearly act out that they are hiding something, it can be really hard to figure out. You can without any effort keep the secret if you want to.  By simply doing nothing.

You will know who killed the rebel leader, no one else will know that you know it, and it will not affect anyone else’s game. It will all be in your head. It will lead to no interaction or involvement whatsoever. You can choose that course of action. But it is not very interesting, for you or anyone else.

Or, you can have that knowledge affect your actions. Perhaps knowing who killed the rebel leader angers you, or perhaps it delights you. Act out that feeling. Perhaps you can begin to hatch a plot of your own because you know the truth, and manipulate the people around you to unknowingly do your bidding. Perhaps you can use the knowledge for your own gain, or to help someone.

By acting on the secret things will happen. You don’t have to reveal the secret. Just act upon it in some way. You will have to something to do, and you can interact and involve other people in what you doing. Taking action might risk exposing the secret, but it opens up a lot of interesting opportunities as well. Taking action involving others leads to more fun.

Sharing information generally helps a larp and your play experince. Even if you have a secretive character, you can share information like crazy. Sharing useless, trivial, false, or incomplete information can be a great way to be secretive.

Another thing you can do is pass on information, even if you don’t have a clue what it is about. For example, when someone asks you something you can pass on the information that they had been asking about it.  “I had this weird mage asking about a three eyed crow.  I don’t know anything about crows, but it is a weird question isn’t it?” Passing on that the mage has been asking questions will not only engage the listeners in a moment of conversation. It opens up a possibility that both you, the mage, or the listeners will get to know more about the three eyed crow and get involved in that plot.

You can share simple observations. Stating that “Tiger looked pissed off earlier” is also a way to involve players and being engaged in other characters stories. By saying that Tiger look pissed off you show that Tiger matters, but also that the listener matters and you want them to know that Tiger is pissed off for some reason.

Can involving players screw up my play experience?

Yes, it can. Five people in a scene might be amazing, but 50 people in the same scene can be cluster fuck. At other times there might be players that you just don’t get along with and that you don’t want to involve in what you are doing. So occasionally involving players in the wrong way can come back and bite you in the tail.

Often you can find way to improve your own and everyone’s game experience if your actions through thoughtful way of involving other players in your play. You just have to do it in smart ways.

Perhaps there’s an opportunity for five people to sneak into the enemy camp during the night and steal the important artifact. But it would be a cluster fuck if 50 people did it. That’s not a reason you can’t involve more than five people in the theft. You can for example involve others by telling them that you will try to steal it, and tell them to come looking for you if you are not back by the morning. You can even indirectly involve them by actively keeping things secret in a way that makes them suspicious.

What about that players, the ones you just don’t get along with? Can you involve them? In some cases you can generate play that improved you or someone else larp by indirect interaction. Let’s say that logically you character would have an message to someone you dislike playing with. Then asking someone else who likes playing with them run that errand creates more play then if you just didn’t send that message. It creates play, conveys the message that might drive the story forward for you and others, but you don’t have to involve players that you rather stay away from.

Involving your fellow players is great larp advice to take to heart. Adopt a mindset and attitude when you try think about how to actively engage and involve other players in what is happening, or involve yourself in what they are doing, and your larps will become even more awesome.

Involving your fellow players doesn’t have to be about grand gestures. Just simply involve them in what you are doing.

Be it sitting down to have a snack, or in slaying a dragon, or playing out the drama of your sister’s betrayal. Involve them. Often, it’s the small gestures that matter the most in the end. The time you asked someone’s opinion, or ask them to tag along on some trivial errand, because the small actions build the framework that gives the rest of the story meaning.

That is all I have to say. 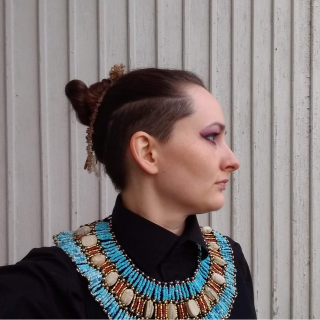 Elin Dalstål (b. 1986) is a larper, roleplayer, designer and organizer based in Umeå, Sweden. She has organized larps, convententions and been on the board of several larp and gaming organisations.